The Canadian Press reports another body is being shipped home from Afghanistan. This time it's a sailor. 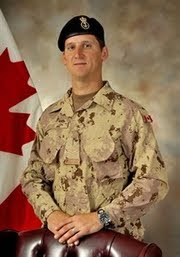 The body of Canada's first sailor killed in Afghanistan since the mission began in 2002 is on its way home.

Blake died Monday by the blast of a makeshift bomb, the very kind of device he was in the country to defuse. The explosion happened while he and his team were walking back to camp after disarming another improvised explosive device near Pay-e-Moluk, a village in the Panjwaii district about 25 kilometres southwest of Kandahar City.

The 37-year-old leaves behind his wife and two sons. His death brings to 143 the total number of Canadian Forces members who have died as part of the eight-year-old Afghan mission.
Posted by Bonnie Toews at 1:12 AM