Is the price worth the sacrifice?

I've just read staggering figures in the Military Times on the amount of suicides occurring among vets and U.S. troops returning from Iraq and Afghanistan. According to staff reporter Rick Maze, 18 veterans commit suicide each day. New data reveals "there are an average of 950 suicide attempts each month by veterans who are receiving some type of treatment from the Veterans Affairs Department." Maze writes:

Seven percent of the attempts are successful, and 11 percent of those who don’t succeed on the first attempt try again within nine months.

Access to care appears to be a key factor, officials said, noting that once a veteran is inside the VA care program, screening programs are in place to identify those with problems, and special efforts are made to track those considered at high risk, such as monitoring whether they are keeping appointments.

Dr. Janet Kemp, VA’s national suicide prevention coordinator, credits the hotline with rescuing 7,000 veterans who were in the act of suicide — in addition to referrals, counseling and other help. In general, VA officials said, women attempt suicide more often, but men are more likely to succeed in the attempt, mainly because women use less lethal and less violent means while men are more likely to use firearms. 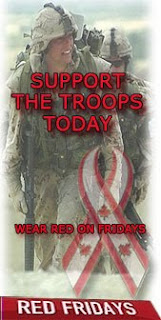 I could not find such an outreach for returning Canadian service people. We continue to pipe tributes for the fallen and those loyal citizens who have faithfully paid tribute on the Highway of Heroes have grown into a strong organization called Red Fridays Foundation.
But what about our returning wounded? It's not enough to praise those who have died and then ignore those who have survived. How many of our present military and vets suffer from post traumatic stress disorder? What are we doing to help them? What are our stats on attempted and successful suicides?
Politicians create the wars soldiers fight. Don't these same politicans also have a responsibility to support their troops' rehabilitation in light of the sacrifice they've made in their country's name? Where is the voice of support for them? If there is one in Canada, it is not very loud or clear.
Posted by Bonnie Toews at 1:58 AM