What drives a soldier to make the ultimate sacrifice as political support wanes?

The Canadian Press reports another Canadian soldier, scheduled to conclude his deployment in southern Afghanistan in a few days, has been killed by a Taliban homemade blast. 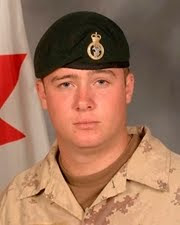 On May 13th, Pte. Kevin McKay from the Edmonton-based 1st Battalion of the Princess Patricia's Canadian Light Infantry died about 15 kilometres southwest of Kandahar city because he was doing his job. The 24-year-old native of Richmond Hill, Ont., was on a foot patrol in the Panjwaii district village of Nakhonay at 8 p.m. local time Thursday at the time of the explosion.
McKay's death comes as hundreds of people prepare to gather in Halifax to remember the first Canadian sailor to be killed in the Afghanistan conflict. A memorial service will be held for 37-year-old Petty Officer (second class) Craig Blake, who was killed by an IED on May 3, also in the Panjwaii district.
Col. Simon Hetherington, the deputy commander of Task Force Kandahar, said McKay embodied the gritty spirit of the typical Canadian soldier. "He was the type of soldier that Canadians must think of when they think of their army in Afghanistan -- the tough, courageous infantryman, living in austere conditions and doing incredibly difficult work," Hetherington said.
"His platoon brothers and friends will remember Kevin, better known as 'Mickey' to his buddies, as a generous man, dependable, with a quick wit and a great sense of humour that was exemplified by his awesome moustache." He was also height-deprived but had no trouble "poking fun and taunting those less vertically challenged platoon mates," Hetherington added.
The Toronto Star's Mitch Potter reported earlier this week how Canadian soldiers and police are risking their lives to visit villages in the cradle of the Taliban to make sure their trainees have benefited from their police training and were applying what they have learned properly to the villages where they live. He described how troops are very conscious of the pull-out date and they don't want the sacrifices made by those before them to be in vain. They want the villagers left to feel more protected and freer, and they want to ensure this after they are withdrawn, so patrols are taking more chances as they visit and mix personally with Afghan villagers. It's typically noble of troops on the ground to believe in their mission because they see the need, while others at home watch the number of deaths and wounded escalate and wonder at the reality.
In today's Toronto Star, Rosie Dimanno laments in her nearly full-page column that, while Parliament debates and investigates the detainee issue, in Afghanistan, Canadian troops continue to die and schoolgirls are being gassed. "Spare some outrage for them," she concludes.

I'd like to add that the federal government's new policy not to address those wounded on the front line makes no sense. Surely the Taliban know the casualties accumulated on their own doorstep, so press announcements are not breaching security. Instead, this policy smacks of a cover-up, which the Toronto Star's investigative reporter David Bruser began to expose in his series "War at Home." The Canadian Association of Journalists has nominated Bruser for an award for this series in the "open newspaper" category. In his articles, Bruser describes the disturbing cases of post-traumatic stress disorder among returning Afghanistan war veterans and the growing problem of post-tour violence.

We never learn do we? This generation's war vets are getting the same lousy treatment Viet Nam vets suffered. And how does this affect the morale of troops still in country? They need to know that what they are doing makes a difference to the folks at home as well as for the locals in Afghanistan to make their conscientious efforts worth the physical and mental price they pay.

And so Private McKay becomes the the sixth Canadian military member to die in Afghanistan this year and the 144th killed as part of the Afghan mission since it began in 2002.
Posted by Bonnie Toews at 12:21 PM