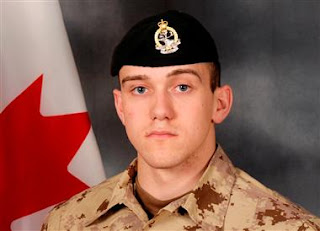 Cpl. Brian Pinksen, a Newfoundland native, was walking a short distance between two Canadian combat outposts on Aug. 22 in the village of Nakhonay, 18 kilometres southwest of Kandahar City, when an improvised explosive device planted by insurgents was detonated, wounding him and one of his fellow servicemen.

Both soldiers were treated at the scene before being airlifted to Kandahar Airfield's Role 3 Multi-National Medical Facility. They were flown to the Landstuhl Regional Medical Centre hospital in Germany three days later. The second soldier is recovering.

A Canadian Forces official said there will be a ramp ceremony in Germany to honour Pinksen prior to his repatriation to Canada. He is the 152nd Canadian soldier to die in Afghanistan since 2002, and at least the sixth to die from injuries sustained in or around Nakhonay since 2009.

In an interview in February 2009, before he headed out to train at Fort Pickett, a U.S. army National Guard base in Virginia, Pinksen told the Corner Brook Western Star he was looking forward to getting to Afghanistan in 2010. "I love it," Pinksen said of military life. "I'm so glad I joined. I did (basic military qualification) while I was in school. I'm glad I did it. I have no regrets."

Read it on Global News: Newfoundland soldier injured in IED blast dies of injuries
Posted by Bonnie Toews at 1:37 AM