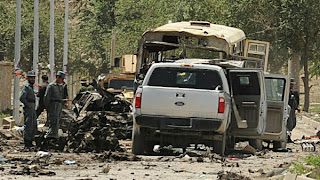 A Taliban suicide bomber in a car packed with explosives struck a NATO convoy in Kabul on Tuesday, killing 18 and wounding 47 other people. Among those killed is a Canadian officer, Col. Geoff Parker, and five American troopers.
The attack comes as a reminder that determined attackers can still penetrate the city's defences just as NATO readies a major offensive in the southern province of Kandahar, a major Taliban stronghold.
Taliban spokesman Zabiullah Mujahid told The Associated Press in a phone call from an undisclosed location that the bomber was a man from Kabul and his car was packed with 1,650 pounds (750 kilograms) of explosive. The target of the attack was the foreign convoy, he said.
The powerful blast occurred on a major Kabul thoroughfare that runs by the ruins of a one-time royal palace and government ministries. It wrecked nearly 20 vehicles, including five SUVs in the NATO convoy, and scattered debris and body parts across the wide boulevard as U.S. troops and Afghan police held a security cordon around wrecked cars, the bus and sports utility vehicles. There were no obviously military vehicles but NATO troops often travel in unmarked SUVs in the capital. 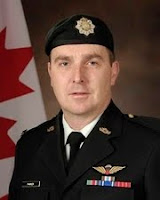 The Canadian Forces colonel has become the latest casualty of Canada's mission in Afghanistan, and the highest-ranking soldier to give his life for the mission since it began in 2002.

Col. Simon Hetherington, deputy commander of Task Force Kandahar, explained that Col. Geoff Parker was the commanding officer of 2nd Battalion, Royal Canadian Regiment, based at CFB Gagetown and was in Kabul to interact with international organizations there in an effort to prepare his team for their upcoming mission."He was a career infantry officer — a proud member of the Royal Canadian Regiment — who excelled in virtually every position he held in the Army," said Hetherington.

"As a battalion commander, he led his soldiers from the front and with distinction. The post he was preparing to fill was important and of such high profile, he was hand-picked from across the Army to do so. A rising star, his potential was undeniable."


In a statement that seemed more detailed and personal than those that usually accompany news of Canadian casualties, Hetherington described Parker as a fun-loving and admirable man who was well-loved within the ranks of the Canadian military.
"Geoff could be incredibly funny and he had a truly infectious laugh and smile; to some, he was simply known as Parker, because that's what his wife called him," Hetherington said.

"We all knew him to be remarkably smart and the consummate professional officer. Equally important, he was always standing by as a friend. He knew when to give you the hard truth to get you going and when to lend a sympathetic ear."


Parker was the seventh Canadian soldier to die in Afghanistan this year and the 145th Canadian soldier killed as part of the mission since it began eight years ago. Two civilians — diplomat Glyn Berry and journalist Michelle Lang — have also been killed.
With files the Canadian Press, Associated Press and The Globe & Mail
Posted by Bonnie Toews at 3:16 PM