It is with deep regret and sorrow that I post this incoming news 27 minutes ago. Remember to watch for the schedule when he will be passing down the Highway Of Heroes. Note the reporter's remark on the "scores of injured" also suffered in this treacherous area by Canadian troops. BONNIE

By Tara Brautigam, The Canadian Press 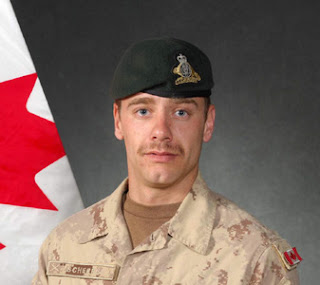 KANDAHAR, Afghanistan - A Canadian soldier has been killed in Kandahar after an improvised explosive device detonated in a hardscrabble village that has been bloodied grounds for the military.

Cpl. Yannick Scherrer was on a foot patrol Sunday when he was killed by an IED blast near Nakhonay, southwest of Kandahar city.

The 24-year-old native of Montreal was on a security patrol with the Afghan National Army at the time of his death. The member of the 1st Battalion of the Royal 22nd Regiment was on his first tour in the country.

"Our thoughts and deepest condolences go out to Cpl. Scherrer's family, and to the soldiers and friends who served alongside him," Brig.-Gen. Dean Milner, Canada's top soldier in Afghanistan, said Monday at Kandahar Airfield.

"Canadians can be proud of the progress our soldiers have accomplished for the people of Kandahar province in Afghanistan. More work remains to be done.

"We will honour Yannick's sacrifice by maintaining our resolve and continuing the fight to make Afghanistan a safer and self-sustaining country."

Prime Minister Stephen Harper expressed his condolences to the soldier's friends and family.

"The relentless commitment of Cpl. Scherrer and other brave Canadians in Afghanistan is a source of pride to all Canadians," Harper said in a statement.

"We will forever be grateful for the sacrifice made by Cpl. Scherrer."

Nakhonay is a battle-scarred village of about 1,000 people. It has been the focus of intense counterinsurgency efforts by Canada's battle group in the Panjwaii district over the last year.

Last month, Milner joined his troops in a patrol of the village during Operation Hamaghe Shay, a mission that yielded caches of weapons and IED components on a daily and nightly basis ahead of the summer fighting season.

At the time, Milner offered a sobering assessment of the public mood in Nakhonay.

"I think they are sitting on the fence right now and they're waiting to see who is more capable, who is winning," Milner said.

"They've been intimidated for so long. Right now is that waiting period to understand what the situation is going to be like during fighting season."

Much blood has been shed in Nakhonay. In the last year here, IEDs killed at least five of the 17 Canadians who died in Afghanistan. Scores more have been injured.

Scherrer's death shatters a period of relative calm for Canadian troops in Kandahar.

It is the first Canadian fatality in Afghanistan since Dec. 18, when Cpl. Steve Martin died from an IED during a foot patrol, also in Panjwaii.

It comes as Canada prepares to wind down combat operations in Kandahar in July and take on a training role that would focus on security, medical and literacy skills.

The latest death brings to 155 the total number of Canadian military members who have died as part of the Afghan mission since it began in 2002.

Two aid workers, a diplomat and a journalist have also been killed in the war-torn country.
Posted by Bonnie Toews at 12:21 AM