After I wrote this Note on Facebook because I was so annoyed to see that, once again, the government doesn't live up to its lip service. People forget that family and partners become victims of the war our vets have fought when they return home needing special care and consideration. Who helps them? In the comments that followed my "outrageous message," it was suggested that I begin posting suggestions on how people can help support our returning vets and their familes in a meaningful way. SEE HOMECOMING VETS.

FIRST: The blog that pointed the direction.
Outrageous failure of government assistance to returning Afghanistan vets 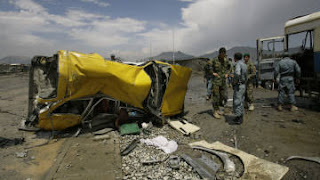 It is wonderful that we celebrate the lives and courage of fallen soldiers when they are repatriated to CFB Trenton and paraded down the Highway of Heroes, but the question that is never answered: who looks out for the returning vets? Especially those whose minds, bodies and spirits have been shattered on a continual rotation of tours through the past eight years.


It is disgusting and absolutely unacceptable to hear that Canada's Veterans Affairs is cutting back on social workers because WWI and WWII vets are dying off.

Excuse me, but Canada has a whole new generation of vets who have served in Afghanistan for eight years. By next year it will be nine years. The war in Afghanistan has lasted longer than either world war in the 20th Century and soldiers have been repeatedly rotated through three and four tours because our forces aren't large enough to handle a deployment this long and this demanding. These vets and their families need help to mend their lives back together.

Kevin Dougherty in Montreal's newspaper, The Gazette, writes that soldiers suffering from Post Traumatic Stress Disorder can wait up to four months before seeing a social worker, a necessary step to integrate them back into society and return them to the labor market.

Why? Because federal social workers each have a caseload of 40 clients to their provincial counterparts, who carry a caseload of 20 clients each. There are not enough social workers to contend with the need, and under such strained resources, these caregivers burn out, depleting veterans' social services even further.

People forget that soldiers returning home are not the only victims of the wars they've fought. So are their loved ones, families and friends. They need as much social assistance as the soldiers themselves. Those coming home are forever changed. They have experienced things the rest of us can't imagine. They carry this psychological burden for the rest of their lives.

In 1994, in Rwanda, I was briefly introduced to that world of theirs. I was one of the few North American journalists covering the massive humanitarian effort following the genocide against the Tutsis and moderate Hutus in Rwanda. One peacekeeper after another told me what they saw, incomprehensible mass slaughter with no human respect whatsoever and they were forced to observe because the UN didn't give them the mandate or size of force to quell the madness. Soldiers trained to fight and defend forced to stand down. Can you imagine the helpless rage they experienced? Yet, when I came home, I faced the same apathy from friends, co-workers and the public as they did. My husband proudly explained that I had been in Rwanda and time and time again I was asked, "Did you go there on holiday?"

People didn't even know what was going on, and were indifferent when I chose to explain. I, like so many soldiers, learned not to talk about it because no one really cared to listen.

This time the public must get behind their vets and demand the social services they deserve and need. This is the most important tribute we can give our returning vets for the sacrifices they've made on behalf of our country.