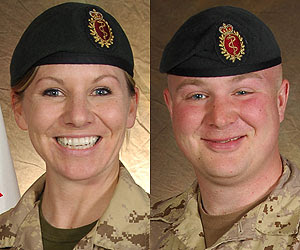 On Saturday, Master Cpl. Kristal Giesebrecht and Pte. Andrew Miller, both medics from CFB Petawawa, were responding to a report of a mine found in the doorway of a home when their vehicle detonated an IED, the military said. The blast occurred about 20 kilometres southwest of the city of Kandahar.

They were attached to the 1st Battalion, Royal Canadian Regiment Battle Group. A third soldier was taken to a hospital on Kandahar Airfield and was in stable condition.

Brig.-Gen. Jonathan Vance, commander of Task Force Kandahar, acknowledged that the medical personnel were likely targeted when they rushed to help the Afghan family. "Medical technicians are indispensable to the work being done by Canadian and Afghan soldiers. They participate in every Canadian Forces patrol and operation," Vance said.

Vance said Giesebrecht was born in Wallaceburg, Ont., and was a member of 1 Canadian Field Hospital, based at CFB Petawawa in the Ottawa Valley. He said she was married and a fit, dedicated and fun-loving medical technician serving her second tour in Afghanistan. "She was a mentor and an inspiration for her fellow medical technicians. Kristal loved life to the fullest. She was a wonderful friend, always opening her heart to everyone in need," said Vance. "Kristal prided herself on her health and fitness, although she always felt the solution to any problem could be found in a box of chocolates."

Miller was born in Sudbury, Ont., a member of 2 Field Ambulance, based at CFB Petawawa. He was serving on his first overseas deployment. Vance said Miller will be remembered as someone who would give his fellow soldiers the shirt off his back and was always the first to volunteer. "Andrew was very confident in both his soldier and clinical skills. He wanted nothing more than to be part of the Health Services Unit for ROTO 9, in Afghanistan, so that he could put his skills to the test," he said. "Called Caillou by his friends, everyone acknowledged the resemblance (to the children's cartoon character) as soon as they met him."

Giesebrecht is the third Canadian woman killed in a combat situation since Canada deployed troops to Afghanistan in early 2002.