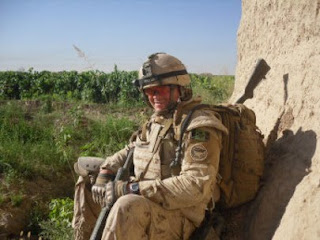 Source: Article by Jasmeet Sidhu, The Toronto Star
Again, an IED has stolen the life of Toronto-born Sapper Brian Collier, 24, shown here in a Facebook photo he posted himself. Ironically, he had already survived wounds suffered from an IED blast earlier in his tour.

He is the 151st Canadian soldier to die in the Afghan mission since it began in 2002. Collier was leaving his vehicle in Nakhonay southwest of Kandahar city, when he was killed by the roadside bomb.

A member of 1 Combat Engineer Regiment based at CFB Edmonton, Collier was serving in Afghanistan with the 1st Battalion, The Royal Canadian Regiment Battle Group.

Born in Toronto and raised in Bradford, Ontario, Collier graduated from Bradford High School and joined the military about three years ago. He was fascinated by the sense of physical challenge, camaraderie and family that the Canadian military represented. Known as an adventurous man who loved sports including skydiving, white water rafting, snowboarding and hockey, Collier, the eldest brother to three sisters, was from a tight-knit family and, with them, always ended his conversations with, "I love you."
Posted by Bonnie Toews at 6:48 AM