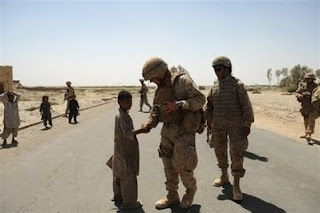 Separate Taliban attacks June 7 mark it the deadliest day in 2010 for NATO troops in Afghanistan. Ten service members have been killed -- seven of them are American plus a U.S. civilian contractor who trains Afghan police and a Nepalese security guard. Reports of wounded in these attacks are not disclosed, but based on earlier stats, more than 5,000 American soldiers serving in Afghanistan have been wounded since the original U.S. invasion in 2002.

While NATO gears up for a major offensive against the Taliban's renewed stronghold of Kandahar -- the former headquarters of the Taliban and the largest city in the southern province, insurgents have stepped up suicide bombings and hit-and-run attacks in the east and south war zones of Afghanistan. U.S. commanders have warned the American public to expect increased casualties once President Barack Obama declared his intention to stem the Taliban's resurrgence when he deployed 30,000 more U.S. troops to Afghanistan to support the alliance's operations after eight years of fighting in the country.

Initially, President Bush ordered the invasion of Afghanistan to rout Al Qaeda after Osama bin Laden's terrorist 9-11 attack on U.S. soil, but this objective switched to ousting the Taliban once American and NATO forces failed to find the terrorist leader.
Posted by Bonnie Toews at 10:13 AM