Today is International Day for United Nations Peacekeepers, and it brings us a moment to reflect on Canada's contributions from the first observer mission assigned by the UN to supervise elections and withdrawal of USSR and US troops from Korea in 1947-48 and as UN observers in Palestine in 1948 to the present. Today, military observers (including seven Canadians) still oversee the Israeli-Arab cease fire.


The actual formation of an international emergency force charged with the responsibility of keeping a "buffer zone" between belligerents while supervising the withdrawal of opposing troops occurred in 1956 following the Suez Crisis. In an attempt to establish itself as 'head' of the Arab world, Egypt decided to nationalize the Suez Canal when Britain and the United States refused to fund its building of the Aswan Dam across the Nile River in retaliation for Egypt's recognition of the People's Republic of China. It was an unpopular gesture because western allies were backing Taiwan's independence from China. Britain and France did not want to lose their access to oil in the Middle East through the Suez Canal, while Israel was concerned over Egypt's arms deal with the Soviet Union to supply them with updated military equipment, modern fighter aircraft and military trainers to turn Egyptian forces into more effective fighting units. Egyptians were already raiding Israeli cargo shipments while passing through the Suez Canal, and Israel recognized this aggressive action as a threat of war. In a secret agreement, Britain and France offered to bomb Egypt if Israel would invade Egypt from the Sinai Desert. What ensued was the Sinai War, also referred to as the Tripartite Aggression, in which the three allies achieved their military objectives, but the United States and the USSR forced them to withdraw in follow-up UN action. While Britain and France were politically humiliated, Israel gained the assurance of peace along the Egyptian-Israeli border once the UN assigned its first international emergency force to control the withdrawal of the tripartite aggressors.

Canadian members of the UNEF on
the Egypt – Israel border in 1962. 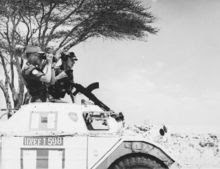 It was Canada’s External Affairs Minister, Lester B. Pearson, who suggested the actual notion of a UN-led “peacekeeping” force to the special emergency session of the General Assembly on November 2nd, 1956. Pearson’s suggestion culminated in the unprecedented formation of the first official armed UN peacekeeping mission, with as its first commanding officer, the Canadian General E.L.M. Burns. The sensitive and critically appropriate timing of Pearson’s proposal was key in the approval of the force and gained him the well deserved recognition of being the ‘grandfather of peacekeeping.’

The deployment of the United Nations Emergency Force acted as a precedent for the way the international community would deal with conflict in the years to come. The Emergency Force formed the basic principles of peacekeeping, and in doing so, set an example for future peacekeeping deployments. The peacekeeping force was slowly transformed into peacekeeping missions with worldwide reach and a powerful impact which continues until today. The ground-breaking approach of the force also helped define Canada’s international military role for the next five decades, as well as its strong peacekeeping tradition.

However, since Canada has particpated in coalition NATO operations in Afghanistan for the past eight years, its UN peacekeeping role has seriously declined. Also peacekeeping missions have suffered severe underfunding and a growing lack of interest of western nations to contribute troops to control "hot spots" around the world. This reluctance as seen in failed missions such as Somalia, Rwanda, Darfur and the Democratic Republic of the Congo undercuts the United Nation's effectiveness and respect. And yet, the UN currently supports 124,000 troops, civilians and police in the field -- more than any other world player except the United States -- more than the United Kingdom, France, China and Russia put together. With an annual peacekeeping budget of nearly $8 billion, the UN manages no fewer than 16 field missions at any given time. And the demand for UN peacekeeping is expected to rise in coming years.

Where is Canada in future UN peacekeeping missions? Maintaining peace in a world of conflict grows more difficult every day. The UN urgently needs personnel with advanced logistics and military capabilities to meet complex challenges to the international community. Canadian troops are among the best-trained in the world and can meet that need. But, the Harper government has yet to recommit to peacekeeping action after 2011 when it pulls out its troops from Afghanistan. For many Canadians, who are proud of the peacekeeping tradition Canada built, it's a humiliating stance to take after our soldiers have distinguished themselves with impressive duty in Afghanistan and sacrificed 146 lives so far to achieve that distinctive service.
Posted by Bonnie Toews at 1:31 AM