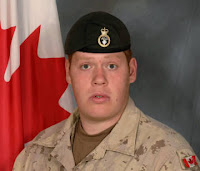 A Canadian soldier has died in an Edmonton hospital three weeks after he was injured by an Improvised Explosive Device while on foot patrol in Afghanistan.

The parents and brothers of Corporal Darren Fitzpatrick, 21, were at his bedside at the University of Alberta Hospital when he succumbed to undisclosed injuries on Saturday.

“Despite our grief, we are immensely proud of Darren as an incredible young man,” his family said in a statement issued Monday. They otherwise declined comment.

Cpl. Fitzpatrick, a native of Prince George, B.C., who joined the Canadian Forces in December, 2006, was based at Canadian Forces Base Edmonton where the infantryman was a member of the 3rd Battalion of the Princess Patricia’s Canadian Light Infantry.

He had been in Afghanistan since October, 2009. Cpl. Fitzpatrick was critically injured west of Kandahar City on March 6, 2010, while on his first operational tour

In an earlier report, it was mentioned that more than 1400 troops have been injured in Afghanistan, but the Canadian military has quietly stopped reporting when soldiers are wounded on the battlefield and will instead deliver annual statistics to the public, according to Murray Brewster, reporting from Kandahar for the Canadian Press. "The stark policy shift is described as a deliberate attempt to keep the Taliban in the dark."

The army has long banned the release of photographs of blown-up vehicles on the basis that it would help the Taliban build bigger bombs. The military also restricts the flow of information in other ways in hopes of keeping the enemy off balance.

A lot of attention is paid to those Canadian soldiers who are killed in action; their caskets are returned to Canada to emotional crowds who out of respect line Ontario's Highway 401 with flags and tributes. Hundreds of soldiers who are severely wounded in Kandahar, however, go home in relative anonymity and silence.

As of the end of December, 2009, 529 Canadian soldiers were listed as wounded in action, according to the military's latest statistical assessment. The numbers go all of the way back to 2002 when the army first deployed to Afghanistan. A further 913 were sent home for what is described as non-battle related injuries, including medical reasons, accidents — or on compassionate grounds.

"Had the new policy been in place previously, the public might not have known about some of the military's more inspirational figures of the last few years, including Captain Trevor Greene, Master Corporal Paul Franklin and Corporal Jodie Mitic," declares Brewster .
Posted by Bonnie Toews at 2:39 PM