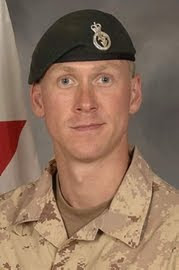 Lt. Andrew Nuttall, along with an Afghan soldier, died when an improvised explosive device detonated in the town of Nakhoney on Christmas Eve. He was on foot patrol in the volatile Panjwaii district of southern Afghanistan. An Afghan interpreter was also seriously injured. Nuttall, 30, of Prince Rupert, B.C., belonged to the 1st Battalion Princess Patricia's Canadian Light Infantry based in Edmonton.

According to Brig.-Gen. Daniel Menard, commander of coalition forces in Kandahar province, "Andrew wanted to lead from the front and set the example, attributes he passionately displayed every time he was in front of his platoon."

Menard cited Nakhoney as an example where the reinforced Canadian forces were having an impact in providing security for local Afghans. At the time of his death, Nuttall was searching for Taliban transit routes, Menard said. "His patrol was part of our efforts to protect the people of the village from insurgents."

Under Menard's new strategy, soldiers are moving out of their relatively safe operating bases to move into platoon houses in the community.

Gov. Gen. Michaelle Jean said she was "deeply saddened. This death comes at the end of a particularly difficult year, and as we begin the holiday season, an important time for families," Jean said. "It is a harsh reminder of the enormous sacrifices our soldiers and their loved ones have agreed to make so that stability and security can be re-established in a dangerous region of the world and to help people who have been deprived of their most fundamental rights, distressed by years of violence and oppression."

Nuttall is survived by his mother Jane and father Richard.


Excerpted from The Canadian Press, article by Colin Perkel