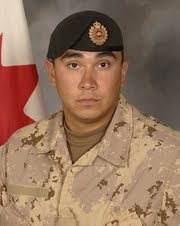 It's with sadness that I post another casualty just two days later. Below is an article written by Jonathan Montpetit of The Canadian Press.

KANDAHAR, Afghanistan - Canada's new counter-insurgency strategy in Afghanistan will be put to the test after an IED blast Friday killed Sapper Steven Marshall near one of its showcase model villages, the second Canadian death in just over 48 hours. His draped coffin will arrive at Canadian Forces Trenton Air Base on Monday, November 2nd, 2009.

Marshall, 24, of 11 Field Squadron 1 Combat Engineer Regiment based in Edmonton, Alta., was struck while on a late-afternoon patrol through Panjwaii district, 10 kilometres southwest of Kandahar city. There were no other casualties.

The military said he was conducting a foot patrol at the time he was killed. His death contributes to a rough start for the current rotation of Princess Patricia's Canadian Light Infantry, with whom Marshall deployed less than a week ago. Fellow Princess Pat Lieut. Justin Boyes, 26, was killed by an IED on Wednesday morning, only 10 days into his mission.

"At the time of his death, Steven was working toward securing the Panjwaii district in order to provide a more stable environment for the Afghan population living there," Task Force Commander Brig.-Gen. Jonathan Vance said Friday. "A stable environment is the best defence against insurgents, because they have no way to counter the positive effects that soldiers like Steven bring to bear."

A Canadian Press reporter who was at a platoon house in Belanday heard the explosion more than a kilometre away, which was followed by a brief burst of small-arms fire. There were conflicting reports about whether the gunfire was directed at the base. Griffon attack helicopters and infantry teams were dispatched to secure the area while Marshall was taken by helicopter to the military hospital at Kandahar Airfield.

"Know that his death will also sadden the Afghan community where he worked to bring them a better life," said Vance.

Marshall, whose hometown is being reported by CTV as Calgary, was described by Vance as a popular member of his unit thanks in part to his sense of humour and "contagious grin."

Prime Minister Stephen Harper issued a statement Friday that also paid tribute to Marshall. "Sapper Marshall, a professional soldier and a dedicated Canadian, has made the ultimate sacrifice in Afghanistan," it said. "The Government of Canada continues to work with its allies towards returning safety and stability to the people of Afghanistan. Progress has been made, but much hard work remains to be done."

Belanday's village elder, or malik, paid a visit to the platoon house late Friday night to hold a meeting with military officials. Belanday, and the five-kilometre area around it, are among a series of villages in Dand district where the Canadian military has been experimenting with a population-centric counter-insurgency strategy. Marshall's company is based in Belanday, though he was posted to a nearby platoon house responsible for patrolling parts of neighbouring Panjwaii, where Boyes was killed Wednesday. The army hopes to expand these model villages further west into Panjwaii, but have met stiff opposition from the Taliban. Canadian troops have maintained a continuous presence around Belanday since July, when they moved into a local compound after clearing the area of insurgents. Their presence was originally intended to provide a buffer zone to the original model village of Deh-e-Bagh, southwest of Kandahar city. But the Van Doos battle group opted to keep a platoon stationed in Belanday to mentor Afghan police and prevent insurgents from returning by offering work projects to locals.

The outgoing company commander, Cpt. Jean Vachon, says they eventually earned the trust of locals, to the point where soldiers on patrol walked hand-in-hand with children and received repeated tip-offs about IEDs. "When we arrived it was a ghost village, there was no one who wanted to speak with us; they were scared," he told The Canadian Press hours before Marshall was killed. "But soon the village streets filled up, even with women who were walking around without their faces covered."

But there had been worrying signs of late that insurgents were keen on reasserting their presence the area. On Sept. 13, Canadian soldier Pte. Patrick Lormand, 21, was killed by an IED. And several days later two young girls were killed in a similar blast. Marshall's death shows that months of progress made by the Van Doos is now being seriously threatened by the resurgent Taliban. "It means there are still insurgents out there living among the population," said Lieut. Jeremie Verville, who has headed a platoon based in Belanday for the past three months. "There is still some work (to) do."

Other Van Doos warned that their recently arrived replacements might be inclined to treat the population with suspicion and hostility in reaction to the death, which Verville said would strain the trust it took them months to build. There was also speculation within the platoon house that insurgents were seeking to exploit the troop replacement process. Soldiers themselves acknowledge that they become less aware as they near the end of their tours, and that new arrivals can lack experience in the field.
Posted by Bonnie Toews at 10:36 AM