Cpl. Martin Joannette, one of two Canadian soldiers who died in a helicop 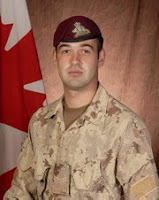 ter crash in Afghanistan 12 days ago, was remembered today at a ceremony at CFB Valcartier, where he served with 3e Bataillon, Royal 22e Regiment. Joanette was a native of St-Calixte, a town some 70 kilometres northwest of Montreal.
Joannette died alongside Master Cpl. Pat Audet, 38, when their helicopter crashed on takeoff in the Zabul province of Afghanistan.
Audet's funeral took place on Thursday, also in Valcartier. Joanette and Audet were the 123rd and 124th Canadian soldiers to die in Afghanistan.
A British soldier was also killed in the crash, and three other Canadian Forces members were injured in the accident, one of them seriously.
Posted by Bonnie Toews at 3:59 PM