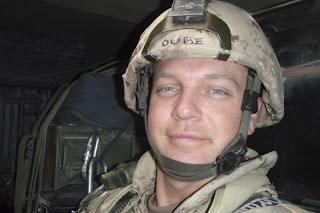 Corporal Martin Dubé, 35, died as he dismantled one of two improvised explosive devices he was trying to defuse exploded in a high traffic area in the Panjwayii district southwest of Kandahar City. Cpl. Dubé is the second Canadian Forces soldier killed within a week by improvised explosive devices (IEDs) during missions intended to neutralize them. The blast also killed an Afghan police officer and wounded a Pashto interpreter, who was rushed by helicopter to hospital.
In losing his life, Cpl. Dubé saved many civilians.
Posted by Bonnie Toews at 10:30 AM