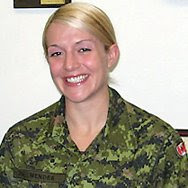 Major Michelle Mendes, an Intelligence officer with the Canadian Forces, has died under mysterious circumstances in her room at Kandahar Air Field. This was her second deployment. She was assigned to Task Force Kandahar, Canada's headquarters operation. In 2001, she graduated from the Royal Military College in Kingston and was married to Victor Mendes, the soccer coach at RMC. In her first deployment in 2006, she was wounded and returned home with a number of soldiers caught in a friendly fire incident when a U.S. aircraft mistook them for Taliban forces and strafed them.

According to the Globe & Mail newspaper, "Maj. Mendes' death comes less than two months after Defence Minister Peter McKay announced a $21-million plan to deliver better care to Canadian soldiers who are suffering from physical or mental wounds, including post-traumatic stress disorder.

"The plan was a response to a damning report released last December by the military's ombudsman who slammed the government for being slow to implement better care for soldiers suffering operational stress injuries — a need flagged in 2002. The military is still struggling with the stigma their culture attaches to mental health problems."