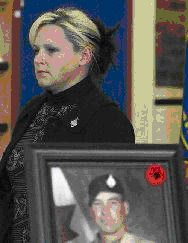 Soldier’s widow believes in his mission.
Mishelle Brown, widow of Warrant Officer Dennis Raymond Brown recently killed by a roadside bomb in Afghanistan, made her husband proud, though it was from beyond the grave. She responded to Prime Minister Harper’s comments on CNN that Canadian and other foreign armies can’t beat the Taliban.
“We may not be able to beat the Taliban. There’s lots of things in our life we can’t beat— obesity, child pornography, crime. But do you give up? Do you stop? Absolutely not,” Mishelle Brown said. “One person can’t make a difference. But if we band together, we can.”
In response to those who want to pull our troops out of Afghanistan, retired General Lewis Mackenzie said in his Globe & Mail column that Prime Minister Harper was not making a political statement when he said we can’t beat the Taliban. He stated a fact. “Insurgencies rarely totally disappear. The objective is to reduce them to a manageable scale where they have little impact on the day-to-day lives of the victim country’s population. Much like organized crime in a large American city – or, for that matter, a Canadian city, given the influence of street gangs in the past decade. Violent crime exists, and there are areas in some cities you should avoid; but the level of crime does not cause the average citizen to ask: ‘For safety’s sake, perhaps the better option is to join the bad guys.’
“The objective in a counterinsurgency is to isolate the insurgents from the support they coerce from the general population through fear and intimidation and to cause their influence to be irrelevant. While the military has a key role to play in achieving this isolation, opportunistic and even frequent victories over the insurgents will not, on their own, guarantee ‘victory’.”
We all need to remember: without the dedication of our troops, we would not enjoy the freedom to debate whether we do bring them home or not.
Postscript: Today another soldier was killed by a roadside bomb, Trooper Marc Diab, 22, an immigrant young man from Lebanon who had every reason to live yet proudly served in the Canadian Armed Forces. Diab's death brings our total to 112. Four of his comrads were wounded, three seriously, and they will be flown to Germany and then home to Canada. They too need our prayers for healing along with prayers for comfort for Diab's family.
Posted by Bonnie Toews at 11:35 PM