There's more behind the McCrystal gaff than meets the eye 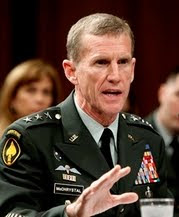 The military announced six more NATO deaths Wednesday — three of them Americans. The three other service members were not identified by nationality, but NATO said all died in the south — two in a bomb attack and one in a firefight. That makes 73 international forces killed so far this month. Forty-four of them were Americans.

In the midst of this increasing bloodbath of NATO troops, including those of our own Canadian troops, is the "flap" over Afghanistan war commander Brig. Gen. Stanley McChrystal's disparaging remarks in the Rolling Stone magazine. Discredit of the U.S. commander-in-chief shortly after Canada's withdrawal of its own battle commander, Brig. Gen. Daniel Ménard, comes as NATO and Afghan forces are ramping up security in and around the key southern city of Kandahar, the birthplace of the Taliban.

Two men with stunning careers are suddenly disgraced. Does this make sense? If top leaders become demoralized enough to throw their hard-earned careers away by letting loose and behaving irresponsibly, what does that tell us? For they know far more than we do about what is really going on in Afghanistan.

Don't you find it a little scary that the first person who defends McCrystal is Waheed Omar, the spokesperson for Afghan President Hamid Karzai?

"The president believes that we are in a very sensitive juncture in the partnership, in the war on terror and in the process of bringing peace and stability to Afghanistan, and any gap in this process will not be helpful," Omar told reporters.

"We hope there is not a change of leadership of the international forces here in Afghanistan and that we continue to partner with Gen. McChrystal."

And Karzai's younger brother, Ahmad Wali Karzai, whom Canadian private security officials accuse of corruption and collusion with the Taliban, gave McChrystal a ringing endorsement, telling reporters in Kandahar that McChrystal's leadership would be sorely missed. "The people trust him and we trust him. If we lose this important person, I don't think that this operation will work in a positive way."

Meanwhile -- get this -- Taliban spokesman Zabeehullah Mujahid said McChrystal should resign because his strategy had "clearly failed."

"The problems between American leaders over Afghan issues very clearly show that the policy and the strategy of America has failed," he said. "They cannot win this war because the Afghan nation is united and they are committed to defeating American forces in Afghanistan."

Feels like smoke and mirrors, folks. If the Taliban want McCrystal to go, then it implies the White House should consider leaving him in place because the Taliban fear his leadership and influence. On the other hand, the Afghan leaders want him to stay, but his credibility as a leader of influence with the U.S. government is weakened. How does that benefit Karzai and gang?

Both the Canadian and American generals have cared deeply about their troops. Their integrity has made them stand out. It's why their troops have rallied so strongly under their command. Could it be that both men can no longer shoulder the corrupt messes their policital commander-in-chiefs have created for them? That the sacrifices exacted are not worth their integrity to support? That the situation here is too similar to Viet Nam where the drug trade escalated and many troops sent home were already drug addicts? That they know they have been thrust into a war the West cannot win?

President Obama and Brig. Gen. McCrystal have already spoken today, and the result of that conversation will be released shortly. My bet is on McCrystal resigning, opting for the relief that comes from conflict between his love for his troops and his disillusionment with his country.
Posted by Bonnie Toews at 11:58 AM