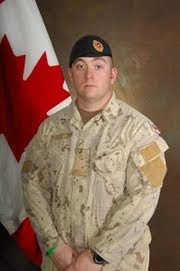 Excerpts from The Canadian Press by Bill Graveland

Sgt. James Patrick MacNeil, 28, of Glace Bay, N.S., was killed by an improvised explosive device Monday morning near the village of Nakhonay after he had dismounted from his armoured vehicle. Nakhonay is in the Panjwaii district, which is known as the birthplace of the Taliban. It has been a bloody battleground for Canadian troops since they arrived in Kandahar province in strength four years ago.

A proud "Cape Bretoner," MacNeil was with 2 Combat Engineer Regiment based at CFB Petawawa and was known for his good sense of humour. According to his men, he was a great person to work for. McNeil was blessed with a "permanent smile and eyes that could not conceal the mischief that he was no doubt contemplating."

In Kandahar, Brig.-Gen. Jonathan Vance, commander of Task Force Kandahar, said: "For each IED that Canadian soldiers find and disarm, Afghan lives are spared and the processes of rebuilding their communities can continue."

Vance added, "Through constant patrolling and maintaining a presence in that community, Afghans know to trust both Canadian and Afghan soldiers and respect their efforts to bring them security from all sources of harm."
Posted by Bonnie Toews at 11:09 PM