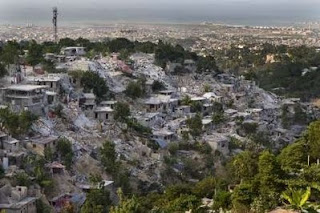 Canadian troops in Haiti: More than 200. Eventual Canadian contingent: Some 2,000 soldiers on the ground, including 1,000 to arrive this week from Royal 22e Regiment, 200 members of the Disaster Assistance Response Team, and 500 on board two Navy vessels already en route. International military contributions: U.S. has ...more than 12,000 soldiers on the ground. UN peacekeeping force consists of 7,000 military peacekeepers and 2,100 international police...more expected.

Doctors Without Borders reports a plane carrying 12 tons of medical equipment, including drugs, surgical supplies, two dialysis machines and a mobile hospital, has been turned away five times from the Port-au-Prince airport since Sunday. "We can't look in the eyes of the victims because we don't have enough supplies to help them." This is why this group couldn't help the abandoned orphans CTV's Tom Clarke found.
Posted by Bonnie Toews at 3:59 PM