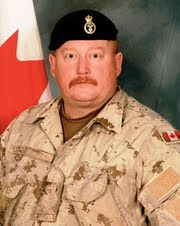 While the world's attention has been on Haiti, another Canadian soldier has been killed in Afghanistan. Sgt. John Faught, 44, of Sault Ste. Marie, Ontario, was on his third deployment in Afghanistan. A father figure to his troops, he was killed Saturday by a roadside bomb in the Panjwaii district of Kandahar province. Sgt. Faught was a member of the 1st Battalion Princess Patricia's Canadian Light Infantry based in Edmonton and was affectionately known as "Toast" because of his crusty personality.

NATO said Sunday an American soldier had been killed a day earlier in eastern Afghanistan in an encounter with insurgents, but gave no other details.
Posted by Bonnie Toews at 1:12 AM