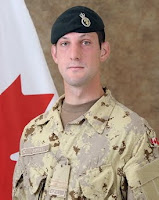 Lt. Justin Boyes was killed in an IED blast Wednesday morning in Afghanistan's Panjwaii district. The explosion also injured two other Canadian soldiers. More than 2,500 Canadian and international troops lined the tarmac at Kandahar Airfield as Lt. Boyes' flag-draped coffin was carried onto a military transport plane. Boyes was only 10 days into his second tour in Afghanistan. He was leading a platoon tasked with mentoring Afghan National Police when it was struck by the IED. He is the 132nd Canadian soldier to die in the Afghan mission since it began in 2002, and the first soldier killed in the current rotation. His body arrived at Canadian Forces Trention Air Base on Saturday afternoon, October 31st, for the honorary trip down the Highway of Heroes.

(Excerpted from the Canadian Press)


In the U.S., President Obama was part of the honor guard waiting for the return of 18 fallen Americans Thursday at the Delaware military base. At least 55 U.S. forces have been killed in October, making this the deadliest month of the war for U.S. forces since the 2001 invasion to oust the Taliban.

(Excerpted from the Associated Press.)