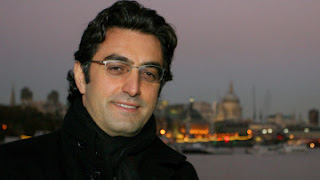 Maziar Bahan, a Canadian journalist on assignment to Newsweek magazine, was covering the Iranian election when he was retained in Iran without charge. He's been held incommunicado in a solitary cell since June without access to his lawyer or Canadian consulate. Recently he was allowed one phone call to his wife in Canada, who is expecting their first baby shortly. She has pleaded with Canadian Foreign Affairs that she needs him home with her when the baby arrives. In the phone call, she did not tell Maziar about the complications she has suffered during her pregnancy. She used the time to bolster his spirits the best she could.

When Canadian Prime Minister Stephen Harper boldly walked out of the United Nations yesterday to protest against Iranian President Mahmoud Ahmadinejad's speech denying the Holocaust and breeches of human rights within Iran, did he even consider how his actions could impact one of Canada's own citizens? Already the federal government has experienced the result of its "do-nothing to interfere" action toward another Canadian journalist wrongfully detained in Iran in 2003, when the Iranian regime murdered Zahra Kazemi, a Montreal photojournalist. No justice has ever been served in her death.

Prior to Harper's walkout at the UN yesterday, he said: “It is important that countries that have a moral compass stand up and make their views known.”

I agree with this morning's Globe and Mail editorial. Mr. Harper should back up his rhetoric and do more publicly to "condemn the unjustified detention of Mr. Bahari." All Canadians demand his release. Why don't you, Mr. Prime Minister? Where is your moral compass when we need it?
Posted by Bonnie Toews at 9:26 AM