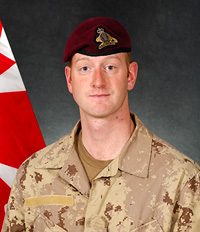 KANDAHAR, Afghanistan - A Canadian soldier is dead following a bomb blast in the vicinity of a major road construction project that NATO is pushing in a volatile district of Kandahar.

"Our thoughts and prayers are with the families and friends of the fallen soldier during this difficult time," said Brig.-Gen. Dean Milner, commander of Canadian troops in Afghanistan. "We will not forget the sacrifice of this soldier as we continue to bring security and hope to the people of Kandahar province."

Prime Minister Stephen Harper issued a written statement on behalf of all Canadians extending his deepest sympathies to Martin’s family and friends. "Cpl. Martin was a brave Canadian who made the ultimate sacrifice while proudly serving his country,” the statement said. "Thanks to Canadian Forces members like him, we continue to make real progress in Afghanistan, rebuilding the country and contributing to the peace and security of its people.”

Governor General David Johnston also issued a statement offering his deepest sympathies to Cpl. Martin’s loved ones. "Cpl. Martin displayed an admirable sense of duty to Canada, bringing great pride to his unit and to the Forces as a whole,” he wrote.

Johnston added that with Martin’s death he now feels the weight of his new responsibilities as commander-in-chief of Canada’s Armed Forces.

Martin was on patrol near a road that NATO forces are carving in the horn of Panjwaii, an area that until recently was dominated by the Taliban and used as a staging point for attacks towards the provincial capital. Although most insurgent fighters fled the area during an initial American assault, some bomb-laying cells have continued to operate in the region as tanks and graders lay down the gravel thoroughfare. There have been daily reports of the Taliban trying to sprinkle the path ahead of the troops with bombs. Saturday's attack shattered a period of relative calm in the troubled Panjwaii district, where most of Canada's troops are based.

Anecdotally, it is known that at least three soldiers have been wounded since the Valcartier, Que. based Van Doo battle group deployed. The military would not say if anyone else was wounded in the bombing that claimed Martin's life.

To date, 154 Canadian soldiers have died as a result of the Afghan mission. The figure includes combat deaths, suicides and one death by natural causes.

The Taliban vowed to keep up a winter campaign against NATO forces in southern Afghanistan and last month issued a rare appeal for funds.
Posted by Bonnie Toews at 4:13 PM