Sourced from Canadian and American Press
Two deaths in trial runs, almost simultaneously--first in Afghanistan and then at the Olympics in Vancouver on the luge slide, even before the Opening Ceremony.

In Afghanistan, 24-year-old Cpl. Joshua Caleb Baker was killed during a routine training exercise along with four other soldiers who were injured. Known to have a "laugh that could cure cancer," Cpl. Baker was an Edmonton native and member of the Loyal Edmonton Regiment.
According to Brig.-Gen. Daniel Menard, the top commander in Kandahar, "this type of training is normal for soldiers in theatre and essential in helping them to maintain high levels of expertise."
Menard described Baker as an "extremely passionate" person who loved his job. "Joshua was mentally tough, physically robust and had a personality that made him a natural leader," he said.
"He had a deep love for his family and worried constantly about them. He also had a deep love for his faith; it was something he took pride in and that gave him strength."
News of the soldier's death came as Canadian troops were taking part in the largest air assault of the Afghan war in neighbouring Helmand province. 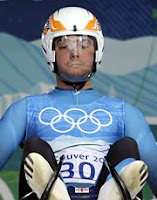 In Vancouver, 21-year-old Nodar Kumaritashvilli from Georgia crashed on the Olympic luge track within sight of the finish line while travelling at nearly 90 mph. In a joint statement by the International Luge Federation and Vancouver Olympic officials, they said Kumaritashvili was late coming out of the next-to-last turn and failed to compensate. “This resulted in a late entrance into curve 16 and although the athlete worked to correct the problem, he eventually lost control of the sled, resulting in the tragic accident.”
Kumaritashvili’s death cast a pall over the Winter Games before they even started. “I have no words to say what we feel,” said International Olympic Committee president Jacques Rogge, visibly shaken by the day’s events.
Posted by Bonnie Toews at 3:59 PM