ONE AFGHAN HERO STANDS OUT 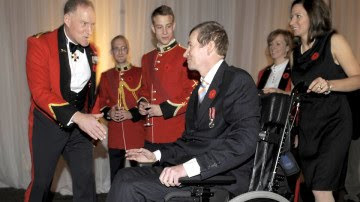 Last year, when I saw a TV documentary about Captain Trevor Green's miraculous rehabilitation, I cried. He is the Terry Fox of the Canadian Forces today but is so humble he doesn't realize it.

Back in public view, Capt. Greene, 44, was the honored guest speaker at a fundraiser founded two years ago by Canada's former chief of defence staff, Rick Hillier. Greene is the Afghan hero who best represents the families whose members have died and those caring for wounded Canadian soldiers who need assistance from the Military Families Fund so named the True Patriot Love Foundation to support their recovery.

Three years ago, Trevor Greene led his platoon into an Afghan village to negotiate with community elders about ways the Canadian military could help them develop their economy and build schools for their children. He and a colleague removed their helmets as they sat cross-legged within the circle. It was their gesture of respect. They were determined to win the elders' trust, but a young boy suddenly came up from behind and struck Greene with an axe. The brutal slash cut down through his head and effectively split his brain in two. No one expected him to live, but with dogged tenacity he clung to life.

Green calls his rehabilitation "a marathon of baby steps." Through it, his fiancée, Debbie Lepore, has been as brave, steadfast and determined as he has been. She has never lost her faith in him or in God's power to heal him, even when the doctors could not promise he would ever speak again, and then when he was told he would never walk again. Though he gave his speech from his wheelchair, he can now stand on his own. Next July, he intends to walk down the aisle to marry Debbie. They have a four-and-a-half-year-old daughter, Grace, who has waited from birth to see the "impossible" feat of her daddy on his feet and hear her parents say, "mission accomplished."

On Monday night, Governor General Michaelle Jean presented him with a new medal recognizing Canadian soldiers' service and bravery today. On Tuesday night, November 10, 2009, he spoke in soft, halting sentences to high-powered dignitaries including Prince Charles and raised $2 million for the True Patriot Love Foundation. The folks who heard Capt. Greene's speech will never forget him. Neither do the soldiers who have served with him. And neither will I.
Posted by Bonnie Toews at 1:53 PM