Back to the Highway to Heroes for another fallen soldier 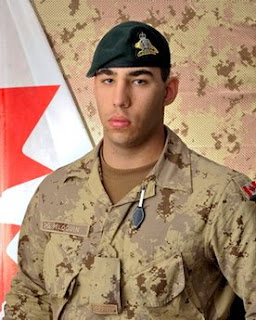 Alexandre Péloquin, 20, died in a blast in the Panjwaii district of Afghanistan on Monday, April 8, 2009. The Toronto Star newspaper reports he called his mother in Quebec a few days before to tell her this incredible observation. "I have never seen anything so beautiful as Afghanistan."

Pélo, as he was nicknamed, is another example of a young man who always wanted to join the military and in his teen years was a cadet while in high school in Lachute, Quebec.

Andrew Chung reports "Péloquin was involved in a six-day operation to find and neutralize improvised explosive devices, or IEDs. Brig.-Gen. Jonathan Vance, senior Commander of the Canadian Forces in Afghanistan explained that, in the village of Nakhoney--about 15 kilometers southwest of Kandahar City where insurgents have increased their attacks on Canadian Forces since 2006--Pélo's group removed material for hundreds of these IEDs and succeeded in removing 15 before he was killed. None of the others suffered injuries.

Pte. Péloquin was a member of the 3rd Battalion, Royal 22nd Regiment, based at Canadian Forces Base Valcartier near Quebec City.

RECENT AMERICAN DEATHS
A week ago Monday, THE TORONTO STAR's South Asia Bureau Chief Rick Westhead reports four American soldiers were also killed by roadside bombs outside Kabul. The bomb blew their armored Humvees into the air. A few days later, three more patrols were bombed but no one was killed. The Americans are finding new efforts to win hearts in local villages are greeting resistance, partly because the locals see American commanders are not treating their Afghan soldiers with the same respect as their own troops. For instance, while U.S. troops live in wooden cabins (with two to three per room) on base, "Afghan troops live together in a single canvas tent, exposed to bone-rattling winds whipping off the nearby mountains." Though this treatment is a result of finding some Afghan soldiers had been stealing from American troops, U.S. Sgt.-Maj. Dewayne Backmon notes: "This war isn't going to be won on technology. We need to be doing a better job relationship building."

Lest We Forget
"... They went with songs to the battle, they were young, Straight of limb, true of eye, steady and aglow. They were staunch to the end against odds uncounted, They fell with their faces to the foe. They shall grow not old, as we that are left grow old; Age shall not weary them, nor the years condemn. At the going down of the sun and in the morning We will remember them."
(Laurence Binyon's "For The Fallen" was published 21 September 1914)
Submitted by MacGregrrrr at 6:49 AM to THE TORONTO STAR Tuesday, June 09, 2009